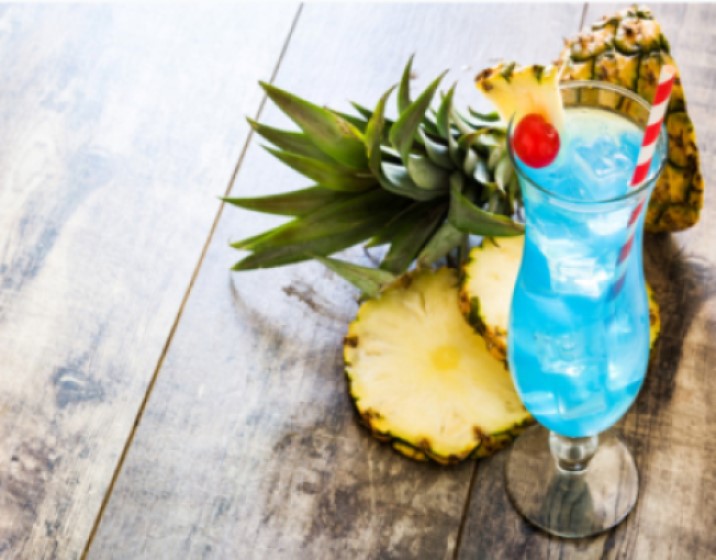 The Blue Hawaiian cocktail was invented in Hawaii by a bartender named George Haze. He went to town on some pineapples that he got from a local lady and made a very sweet drink for his customers.

The name “Blue Hawaiian” drink comes from the blue fruit in the cocktail.

He was married to Haliokalani (Queen Liliuokalani) so they’re both considered local celebrities. Haliokalani had to leave Hawai’i when she was a young child because of a civil war.

Later, they would come back together to live at a plantation in Maui, but after that, they had to leave Maui again to go to Washington for a while. Haze and Liliuokalani would write letters to each other about their lives. Maui’s not the only island that has pineapple and gin. Tahiti has coconut and gin, and Samoa has palm sap and ginger. By the way, the Philippines have gin and nutmeg, and Singapore has Scotch and rice. China has China tea and hemp. This list could go on and on.

If you’re ever out of a country, you can also buy mixtures in a mix can that have all these ingredients in it, so you can still have a Blue Hawaiian, even if you’re not out of a country.

Ingredients for the Blue Hawaiian Blue Hawaiian Cocktail (Shandy) – This summery frozen summer drink is a tangy twist on a Shandy which is beer with lemonade. The Hawaiian word for Shandy is “Hula Hula” and “Pineapple” is called “Tropic.” When working the fresh fruit, always cut the pineapple around the top of the pinecone, so that the pineapple and its juices can be easily released when you squeeze it.

Tiki Storm – this fresh, fruity mix will help you start the summer off right with a tropical aroma, that when combined with rum will provide you with the kick you need! The garnish is a flaming palm leaf to represent this tropical island paradise.
Chinatown White Tea and Bamboo Liqueur – I am not sure about you, but I do not know the proper name of this liqueur, but I think it is made in China. Although it is quite tasty and it also is quite affordable, this liqueur is usually made from rice.